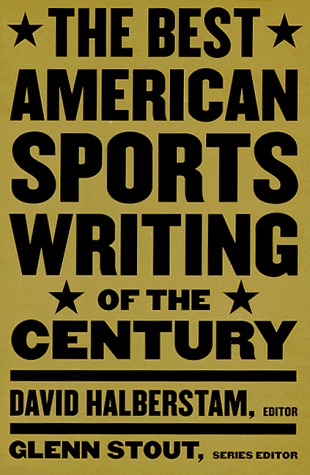 The Best American Sports Writing of the Century Book Details

The Barnes & Noble Review: "The front page chronicles man's defeats. The sports page chronicles man's triumphs." So the adage goes, never more true than when surveying 100 years of American history through its coverage of sports. From Bobby Knight to Bobby Fischer, from Secretariat to Sugar Ray, from Butkus to the Babe, the 20th century abounds with classic figures in sports history. Their compelling stories fuel our collective memory. In the pieces assembled here, The Best American Sports Writing of the Century captures these indelible moments in words worth a thousand pictures. Working with series editor Glenn Stout (Best American Sports Writing 1999 etc.), Pulitzer-Prize winner David Halberstam (The Summer of '49, Playing For Keeps:Michael Jordan & the World He Made) selects the century's most engaging sports journalism. While the task was surely a challenge, the result is a near-seamless retrospective of contemporary athleticism. The pieces are contemporaneous with the events recounted, infusing the entire collection with an intimate immediacy. You are there — with Joe DiMaggio, Junior Johnson, Muhammad Ali, Branch Rickey — again & again. The writing is uniformly excellent, mixing some familiar choices with otherwise overlooked gems. However, one criticism must be noted: This is for fans of men's endeavors, for women hardly appear in the 800-plus pages. No exquisite essays on Wilma Rudolph's struggles to achieve Olympic gold. No mention of Chris Evert's importance to tennis. No hymns of praise for Peggy Fleming's inspiring skating. Nohyperboleabout Shirley Muldowney's drag racing prowess. No Mary Decker, no Nancy Lopez, no Picabo Street. Perhaps a companion volume is in the offing. For capturing 10 decades of achievement by the men, tho, no tribute could be finer. Whether rejoicing on the quietude of fishing (Thomas McGuane, The Longest Silence, 1969) or the cacophony of Bobby Thomson's pennant-winning heroics (Red Smith, Miracle of Coogan's Bluff, 1951), the writing is evocative and timeless. Some athletic greats are viewed as their careers are poised to explode (Tiger Woods in 1997's The Chosen One, by Gary Smith). Others are glimpsed in the rearview mirror: DiMaggio in 1966's The Silent Season of a Hero, by Gay Talese; Ty Cobb in 1961's The Fight to Live, by Al Stump; & Billy Conigliaro in 1989's "A Brother's Keeper," by Mike Lupica.

In a marvelous choice, Halberstam concludes the book with six essays on Ali. The selections represent the full spectrum of his athletic and public career, from cocksure Cassius Marcellus Clay (Murray Kempton, "The Champ and the Chump," 1964) to reflective disciple of Islam (Dick Schaap, "Muhammad Ali Then and Now," 1971) to resurrected warrior in Manila (Mark Kram, "Lawdy, Lawdy, He's Great," 1975) & beyond.

Readers Enjoyed The Best American Sports Writing of the Century Also Read These :

Ask the Dust (The Saga of Arturo Bandini, #3)

A Fire in the Sun

Mike Hammer: The Night I Died

The Best American Sports Writing of the Century Reviews